Free Gift Membership to “Learning to Earn” see below.

If you’re approaching retirement age and wondering what you can do to enjoy a long and healthy life in your golden years then consider adopting the attitude of a lifelong learner. Most people think of lifelong learning as being confined to academic endeavors however the lifelong learning approach covers all areas of life including spiritual, social, academic and physical.

Lifelong learning is based on an attitude of constantly growing and evolving in various areas of your life. The old saying that whenever anything is not growing it is decaying could be just as true for us as humans. No matter what a person’s age there are great benefits to be gained by challenging yourself in the different areas of your life, physical, mental and self-deveopment.

Physical challenges must be appropriate for your level of fitness, but regular exercise of some kind will leep your body healthier and your brain healthier too. Mental challenges do not have to be academic study, they can be a new hobby or interest, a new caring or chrity venture, more involvement with family. The most growth in personal development will come when you take on something that is currently outside your comfort zone (nasty words those, aren’t they? How we love to stay in our comfort zone, even when it isn’t all that comfortable really).

Lifelong learners live by the motto “you’re never too old to learn” and this attitude is a big part of the reason that people who approach life with this mindset are seen to perhaps live longer but definitely enjoy a better quality of life – is the so-called law of nature known as the “use it or lose it” true?

It does seem to be the case that those who are considerably inactive develop mobility problems as they age, whereas those who are quite active do not develop these mobility problems. A similar effect takes place with anyone who takes no part in any mentally challenging activity or pursuit. After years of mental inactivity

A very useful tool I use, mainly for backing up online and sharing files within my own network , but it has the potential for much much more is Dropbox. Yes, there is an upgrade option, but you can use the free version very well. There is also an option to get more free storage space when someone you tell about Dropbox signs up.

So what does it do?  It lets you share your files and folders with others by sharing an existing folder on your PC or creating a new one to share. Once you add other members to the folder, it will appear in your friends or colleagues own Dropbox just as it does in yours. Any changes made to the shared folder’s contents will appear instantaneously to everyone who is a member of that folder. You can create a folder in your Dropbox folder just as you would anywhere else on your hard drive.Can you see the potential in this?

There are two ways to setup Dropbox, as a local application or online. The procedure is pretty much the same either way. 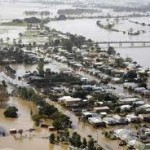 My city is in the midst of the worst flood since 1974. The death toll has reached 14, mostly from the torrent that originated in Toowoomba & swept through the Lockyer valley, upstream from Ipswich & Brisbane, so although we have very serious flooding in the city, we had plenty of warning so little loss of life or serious injury. However, the amount of warning is no compensation for the approx 20,000 people in 30 suburbs whose homes have been inundated with smelly brown, water.

I’m lucky to be in a higher area. My place is 100 yards off  a major road which is flooded down the end about 1km from me. The store I buy my elctronic goods from just down there had water nearly to the roof & it is on a high bit. When I saw that shown in an aerial view from the TV chopper this morning, it really threw me as I didn’t think the water would reach there at all. 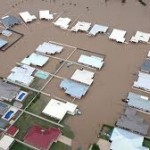 They’re asking people not to go sightseeing, so it’s a strange feeling, on the one hand watching the grim scenes on TV but on the other, from where I live and the places I have to go for work, life is seemingly normal.  However, for the thousands and thousands of people with water through their homes or businesses, it certainly is a major disaster. And it’s not just here, NSW and Victoria still have the rain and the water that fell to the west of the ranges.

Especially hard hit are some of the smaller towns in the north and the west who have already had big floods since Christmas, have just cleaned up and now have to start all over again.

The cost of the cleanup for flooding on this scale is massive and many of the victims will suffer severe financial hardship. Any donations you are able to make would be received gratefully. Here is the link to the QLD Govt flood relief appeal www.qld.gov.au. Donations can be made online, by phone, in person, internet banking or mail. Our hearts go out to all who are suffering.

Adding a banner to your blog, at the top, middle or bottom of posts or in a sidebar has always been very time-consuming and a bit of a fiddle for me. Today I’ve tried out the Max Banner Ads plugin from maxblogpress.com and it is so simple, a beginner could get banners up in no ti,e at all. See the banner at the top of my home page.

Apart from being able to choose the poition of the banner, you can also have rotating ads, so that when you refresh or re-visit the page, there is a different banner being shown. There are various ways to add the banner, from a URL or upload from your PC.  If you are promoting an affiliate product and they give you html or java code, you  just select the option “Other Text Ads / Flash / Javascript ….” and paste the code in. Easy as pie and I had mine done in less than 2 minutes.

The free version shows “Powered by Max Banner Ads” underneath. Although you can remove this if you purchase the Pro version, you can easily embed your clickbank hoplink, so worth considering leaving it there.

The help is very detailed and easy to understand – there are “How to…” pages for just about anything you could think of such as:

The video on how to use Max Banner Ads and all the features is extremely well done, runs for over 9 minutes and goes into all the detail  including  you need to get going. All in all, I find this to be a highly recommended plug-in for people wanting to maximise both their promotions and their time. Doesn’t that include all of us?

As I age myself I’m finding many of my friends are facing the problem of how best to care for elderly parents. Nothing is worse than the call from neighbours of your elderly mother or father to say that there has been an accident or illness and your parent has just gone off to hospital again.

When you are the only one of your siblings in

the same town as your mother, father or other relative, much of the care may fall to you and sometimes it just seems to get to be too much. Even unfair.

When it comes to eldercare, it is very important that you are prepared before you are facing critical decisions. Educating yourself about the options available to your parent before the fact will allow you, your siblings and your parent reach the plan of action for his or her situation.

The ebook “How to Take Care of Those Who Took Care of You” is an excellent Eldercare resource and will answer your questions and even some you hadn’t thought of yourself. 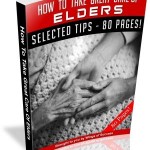 If you don’t want to buy the book, you will find halfway down the page, an excellent free 80 page book titled “How to Take Care of Elders“.